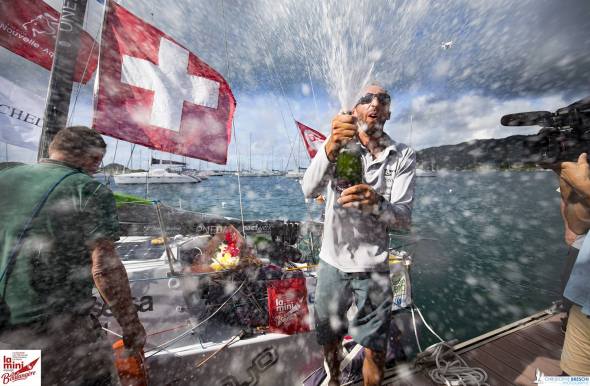 Sixth of leg one, between La Rochelle and Las Palmas, the skipper of Eight Cube met conditions that were more favorable to his boat during leg two, with stronger winds. He crossed the arrival line in great shape and spirits on Wednesday, at 1:13 04’’ PM (CET), after 13  days, 56 minutes and 10 seconds at sea, at an average speed of 8,78 knots.

« I am very happy to touch land in Le Marin, and also to finish third », he said. « I haven’t had any information for the past ten days because I broke the radio antenna (the cable, I guess), so I didn’t know if there would be ten boats in the harbor when I arrive… I am super happy because I have been working very hard to get there. A podium is fantastic! »

Third of the second leg in the prototypes category, Simon’s aggregated time over both legs is 24 days, 6 hours, 5 minutes and 40 secondes. He should, after the jurys’ approval, end up third overall.

Simon sailed at the front of the fleet during the entire regatta, in the wake of race leader and favorite Simon Lipinski. He lost some ground during the second half of the Atlantic crossing, letting his direct opponent, German Jörg Richers grab the second place thanks to an efficient southerly route.

Simon worked very hard towards his objective, over the past two years. Seventh in 2015 with the same boat SUI 888 (fresh out of the yard), with its distinctive scow bow, developed with the support of Michel Desjoyeaux’s yard, Mer Agitée, he now ambitions to benefit from this Mini Transat to develop new and more ambitious projects, including a participation in the Route du Rhum 2018.

This entry was posted on November 15, 2017 by simonkoster. It was filed under Uncategorized .

This site uses Akismet to reduce spam. Learn how your comment data is processed.